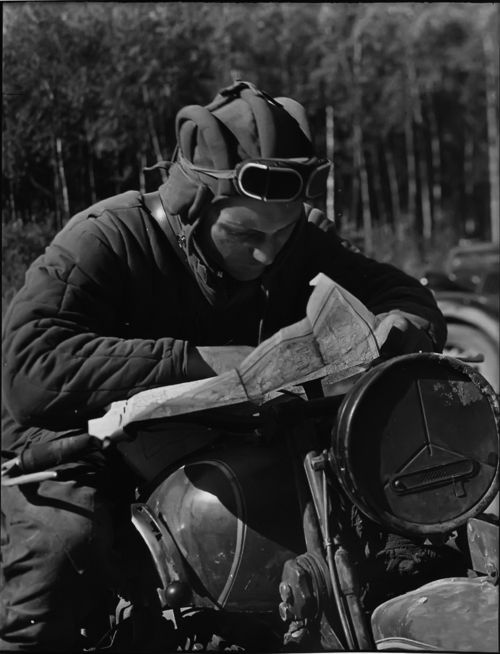 Basic equipment and techniques to map your adventure

It was 1932 when three Swedish brothers, including Bjorn Kjellstrom, the Swedish national ski orienteering champion, designed a new kind of compass. Their modifications, a liquid-damped housing and clear baseplate, became the foundation of the Silva Compass company which thrives to this day.

But it took 23 more years for the famous Kjellstrom brother to publish his famous bestseller, Be Expert with Map and Compass. His daughter, Carina Kjellstrom Elgin, updated the book in 2010, and it’s now available online as a free PDF. If you don’t have a copy, well…you’ve got that to look forward to! It’s a great introduction to the art and science of terrestrial navigation. 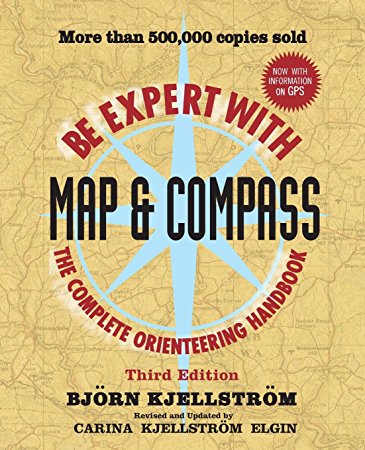 Be expert with map and compass

The title of the book may be a promise or an admonition; I’m not sure which.

But, since the book only arrived more than two decades after the brothers invented their whiz-bang compass, I figure the 23-years-wiser Swedish champion finally realized that outdoor equipment may be shiny, and navigational party tricks might impress girls (Swedish girls, maybe?) — but people are usually the cause of their own problems….

So, instead of inventing a whiz-bangier compass, he wrote a book. And one of the consistent themes in his book, and others that deal with navigation, is “staying found.” Although perhaps imprecise, the term is grounded in a pretty obvious idea: it’s easier to always be aware of where you are, than it is to figure out your location once you’re “confused of your whereabouts.”

The crucial aspect to navigation is…you.

Now, even if you’ve never picked up a Silva compass, you likely already have one of the essential skills of an orienteer: navigational anxiety. That’s the condition I just invented that refers to the fear of pointing your GS off the pavement and riding until you’re nowhere near a Starbucks. Or a hospital.

NA is one of those specialized performance anxieties that keeps you from jumping out of windows and handling snakes; NA helps you choose smart, adaptive survival techniques.

Like reading the classic book on land navigation, and taking a compass and a map on every single adventure ride.

Let’s just pause a moment here and address the elephant in the room, shall we?

Cell signal is sparse or non-existent out where they keep the adventure. But you’ve downloaded maps for offline use, you say? You know how to use the satellite GPS functionality of your shiny new Gizmo two-point-oh? Well, you’re smarter than me.

But are you smart enough to conduct field repairs on a 2,900 mAh rechargeable lithium-ion battery after you drop your iPhone into the Sonoran sand or the Pinelands puddle? Can you reverse engineer your Galaxy from the scattering of small plastic bits left in the divot you just gouged in the dirt when you crashed?

Same goes for your tablet, laptop, your phablet, if you’ve got one, and if that name still exists. (It shouldn’t. Seriously.)

Anyway, I’ve ranted about this before.

So let’s get to the other elephant in the room: GPS

I like Global Positioning Systems. I’ve had several, and I’ll write some posts about the units, mapping software and mounting systems I use.

But here’s the thing: as I said, I’ve had several…including three replacement models of a brand-new, high-end, immodestly-priced Garmin unit. Replacement, as in: bought it, tried it, failed. Rinse. Repeat. Repeat. Argh!

It’s not so surprising. Adventure riding is hard on equipment. Heat, vibration, cold, high-speed impacts, dust, rain, snow… So if you do decide to point that GS off the pavement, you simply can’t rely on your phone or your GPS; use them, love them — by all means. Just don’t rely on them.

Back to Basics, Bjorn

Here’s where you start, with the basics: take a map and a compass with you on every ride.

A modern compass is pretty much bomb-proof: the one moving part — the needle — floats in a vibration-damping bath of oil.

You can rely on paper, too. It’s got a fail-proof battery (i.e., none), and survives vibration darn well. Upgrade to a Ziploc bag, and paper laughs at rain and snow.

If you’re riding long distances, you might require a lot of maps, since you ride across them quickly. But you can purchase smaller-scale maps (which show a larger area), cut away areas you won’t be travelling, and cover a vast area with a stack of maps not much thicker than the flyers you get in the mail even if you’ve told your letter carrier you don’t want them. And you can write on maps, tracking routes, making notes, locating gas stations.

The ideal solution is to combine paper map and compass with a GPS (or two). We’ll get to more detail on that in another post. For now…

Okay, I’ve stuffed my map in that little plastic window on my tank bag? Now what?

The tank bag, I mean; keep the map. Oh, heck, keep the tank bag if you like as well, but save it for mounting on your street bike.

Tank bags inhibit your ability to move on the bike, particularly when riding while standing and while ascending hills. There are diminutive little tank bags that stay safely out of the way — but then they either don’t have a map pocket, or it’s just too small to be of much use.

Motorcycle-specific map holders often rely on magnetic mounting on the gas tank, but many dual sport and adventure bikes have plastic moldings on their tanks — or even full plastic tanks. Other models clip to the crossbar, which many adventure bikes don’t have. Awkward. I also dislike these models because, even if I have a handy crossbar, the map obscures my view of the instruments and other hardware attached to my handlebars.

A better solution is a map case designed for kayaking and canoeing. I use the SealLine HP: it’s large (comes in two sizes), flexible, durable and thoroughly water proof. They usually last me at least several seasons of riding, if not more.

Other map cases resemble a resealable, Ziploc style bag on steroids. These tend to be made of stiff plastic, making it a bit challenging to insert your maps. I prefer a softer plastic, like that used in the SealLine HP. 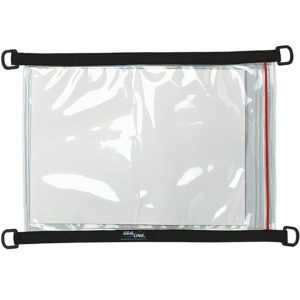 Use zip ties (cable ties) through one set of D-rings to attach the case to your handlebars; if you use the HP, you can actually remove the neck strap and use the webbing fasteners to secure the map case to the bars.

You’ll also need a Velcro strap or some sort of webbing about 20 cm long. Once your map is inserted, you’ll roll up the case and wrap a strap around it to keep it out of the way while you ride. (I use zip ties again to attach this strap to the handlebars.)

The downside of this system is that you can’t examine the map without stopping your bike and releasing the strap.

The upside of this system is that I no longer crash while staring at my map when my eyes should be on the trail.

You win some, you lose some…

There’s more to navigation…but, as they say, walk before you run. Get a map and a map case for your bike; a small baseplate compass; a bit of knowledge. Start reading your copy of Bjorn’s classic, or another of the many great books and websites, and I’ll get back to you with more posts on navigation, including using your GPS.