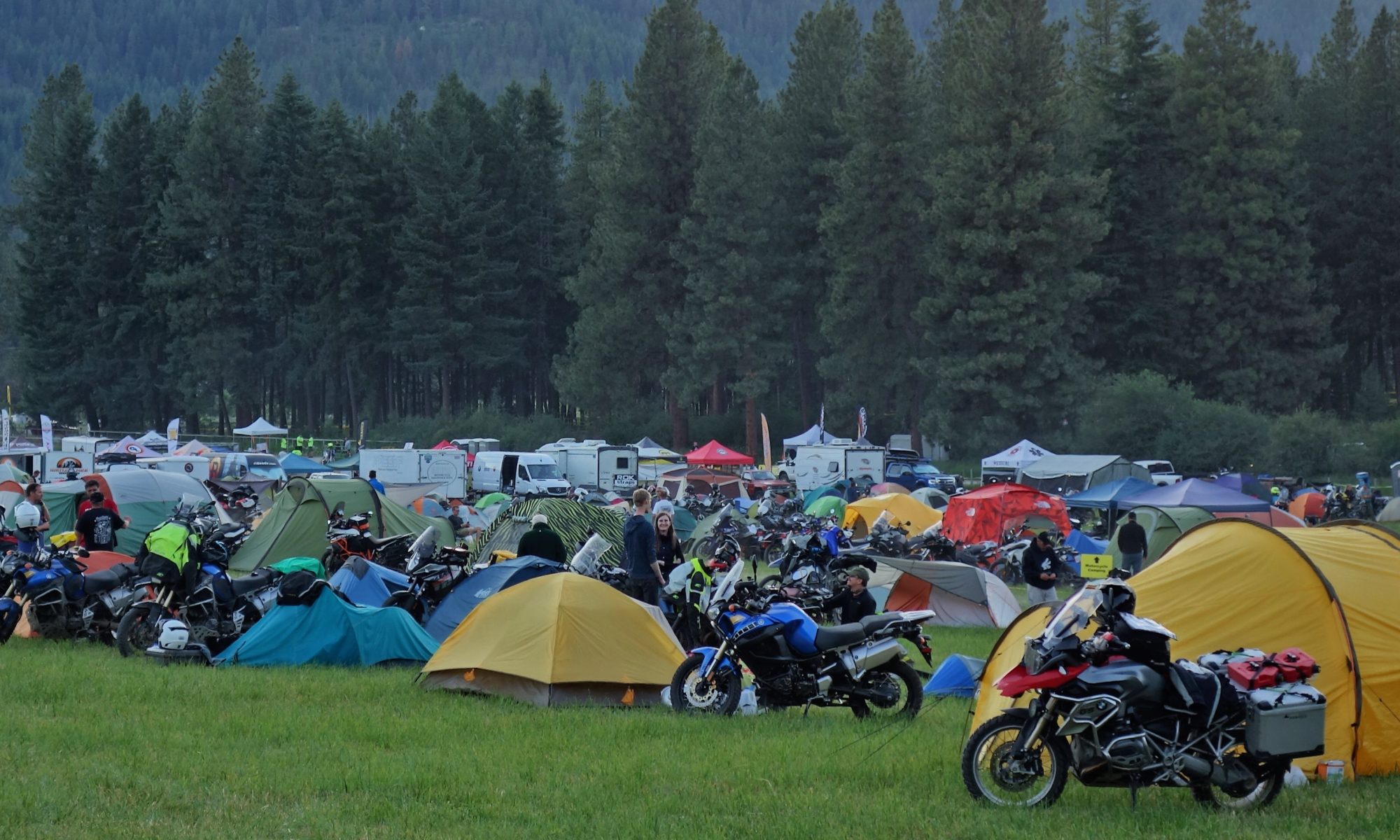 You might have seen my teaser post about the largest adventure motorcycle rally in North America, 972 New Best Friends, first published in Canadian Biker magazine, August 2017.

Well, here’s the whole story of field repair magic, endless summer riding, and a guy named Jimmy Lewis. You might have heard of him.

Winter 2017 stubbornly relented in British Columbia sometime around late May, so the last weekend of June marked my first camping trip of the season.

With the heat blooming and the snow finally melting from the high elevations, it was time to explore the peaks of the Pacific Northwest — just me, my Husqvarna TE610 and 972 friends. 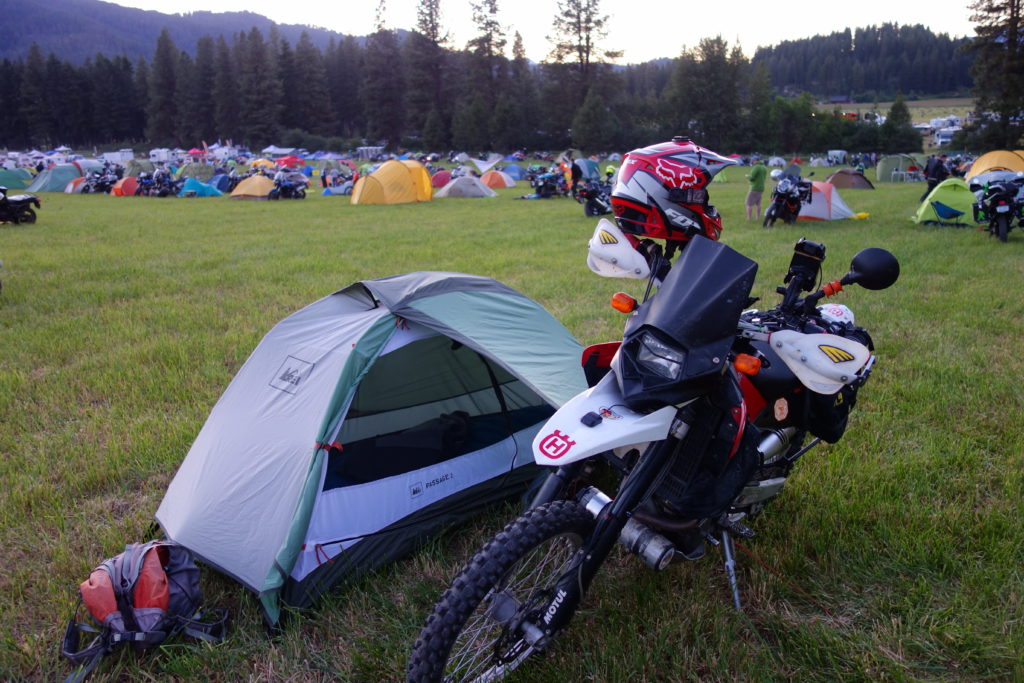 No, I’m not that popular. But the folks at Touratech USA have no problem assembling an enthusiastic crowd at their annual Touratech Adventure Rally. They’ve hosted this event for seven years in the northwest – the last four in Plain, Washington – staging seminars, demonstrations, lighthearted competition and serious instruction over the three-day event.

Held on the final weekend of June each year, this edition of North America’s largest adventure rally drew riders from as far away as Florida, Montana, Texas and Alberta; there was a tight-knit bunch of transplanted Argentinians, living in Los Angeles, and hankering for an adventure. (Apparently, Argentinians want to ride here, while we want to ride there. I think that’s the irony they call “life”….)

Riders trickled into the event site throughout Thursday afternoon on their GS Adventures, their KTMs, Africa Twins, trusty KLRs and V-Stroms and DR650s. It was a marque-agnostic gathering of men and women, veterans and neophytes, all united in their love for motorcycles, adventure, and the top-drawer quality of people who are drawn to both. 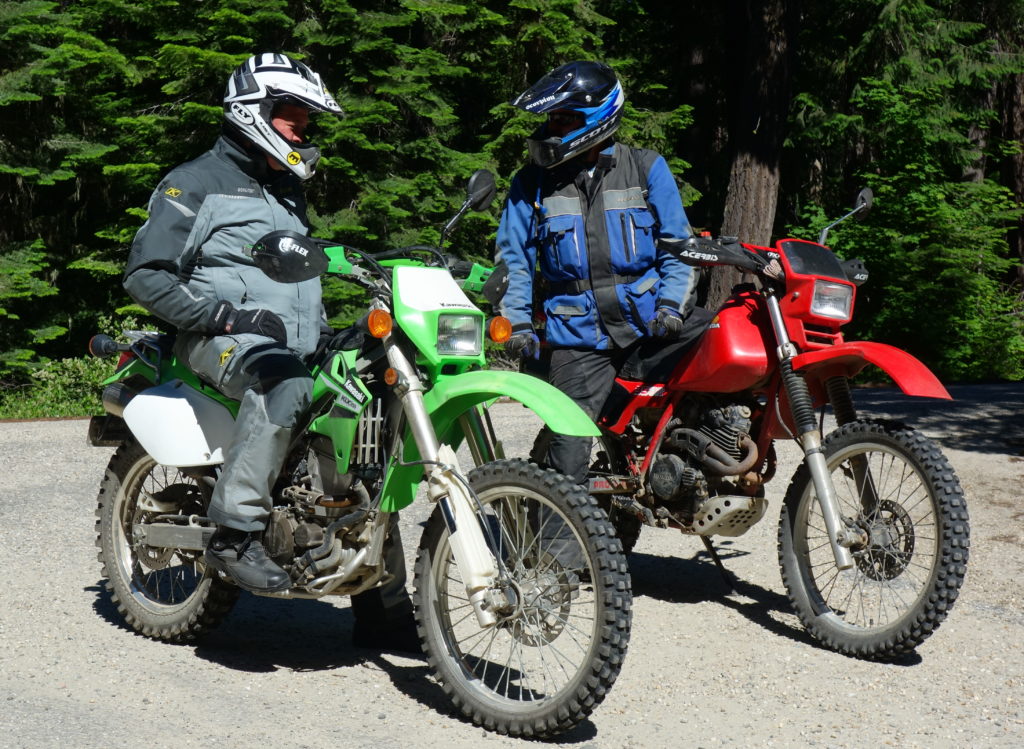 Rally participants set up tents and pull up RVs in a valley dividing the snow-capped peaks of the eastern reaches of the Coast Mountains from the more subtle contours of the interior plateau. Plain is the perfect convergence of rain shadow, accessible terrain and grand panoramas: the off-road riding opportunities are dry, scenic and virtually unlimited.

There’s plenty of space at the rally site’s grassy field for participants’ and vendors’ tents, and fuel, groceries and a restaurant are situated right across the street. Accommodating local landowners and proprietors open their arms to the legions of two-wheeled weekend warriors, providing service with a smile to the outsized waves of customers rarely seen in this tiny hamlet.

In preparation for the rally each year, a team of volunteer pathfinders, riders and GPS wranglers, coordinated by Touratech staffer Iain Glynn, start scouting the area as the snow melts. They devote more than a month to verifying road conditions, uncovering new trails, collecting GPS data and designing safe, enjoyable routes

This year’s menu offered up 11 rides, ranging from 45 to 185 kilometres in length, blending over 1,000 kilometres of pavement, logging roads and sections of single-track. That’s a pretty impressive number – but over the last seven years, staff and volunteers have recorded an astounding 80,000 kilometres of GPS tracks in the area! It’s a titanic effort, requiring coordination with the changing priorities of local forest service managers and navigation of a winter’s worth of erosion, mud and downed trees.

Rally participants have the option of navigating the resulting GPS tracks on their own, or of signing up for some of the dozens of organized group rides. The two I joined were seamlessly shepherded by Glynn’s well-prepared ride leaders and sweeps, allowing rally participants to focus on the trail, meet new friends, and leave the planning and safety management to the expert volunteers.

Tracks like “Ridge Runner” and “Dry Creek” ascended the crests of rolling mountains, topping out at over 1,800 metres, high enough that the snow had only recently cleared the extensive network of logging roads. “Infinity” challenged riders to negotiate kilometres of snaking single-track – and at least one rider on the somewhat ponderous V-Strom 1000 was up to the challenge! Easier options abounded, as well, tracing local pavement and graded dirt tracks through Wenatchee National Forest, following roads with improbable names like “Chumstick” and “Chiwawa.”

Back at the rally, tired and absurdly dusty, riders parked their KTM Adventures next to WR250s before braving the cold-water showers and raising a complimentary pint of some of Washington’s finest craft breweries.

Touratech USA’s Marketing and Events Director, Matt Lewis, is responsible for orchestrating most of what happens back at the event site. With the growth in the adventure riding segment, the rally has expanded yearly, so Matt now finds himself beginning work each September on the next June’s event. In fact, most of Touratech’s staff is involved in some fashion, and there are about 100 volunteers who play a critical role as well.

It takes a team that large to put on thousands of kilometres of organized rides, and then to stage more than 30 seminars and presentations from Thursday evening to Saturday night.

In his “Emergency and Field Repair Clinic,” Alex Guth, owner and master mechanic at AlyxMoto, confirmed my conviction that cable ties, duct tape and baling wire are magical. Louise Powers, A Girl On A Motorbike off-road coach, shared the tale of how an engagement ring led to her planned departure for a ride to Patagonia this coming August. The Backcountry Iron Chef Competition inspired questionable genius, and plenty of audience laughter, in the form of sautéed shallots…with Cocoa Puffs.

There were seminars on motorcycle recovery using mechanical-advantage systems; cultivating a deeper perspective on life through riding; converting your cable clutch to an hydraulic set-up; and adventure stories set in Alaska, South America and Nevada – and most places in between.

In between seminars and rides and trips to the burger stand, riders rekindled friendships and made new acquaintances, discussing adventure bikes and the great people you meet when you’re riding.

Honda and KTM are some of the more keen corporate observers of this adventure bike community, and they served up a full roster of bikes for demo rides. The Africa Twin DCT and KTM’s off-road focussed 1090 Adventure R, not surprisingly, drew riders like teenagers to an all-you-can-eat buffet. Honda’s bikes were yours for an independent half-hour romp; KTM followed the same route through the surrounding hills – but you had to follow their ride leader and stay in the group.

Level up with Jimmy Lewis

For those looking to level up their riding skills to make better use of that new KTM – or to shake bad habits consolidated over decades of riding an old dirt bike – training courses were offered from Wednesday to Saturday. Jimmy Lewis Off-Road Riding School, Dirt First Off-Road Training and PSSOR ADV Training each offered professional instruction in the techniques every dirty rider should know.

Then, each evening, Jimmy Lewis – Dakar podium finisher, multi-ISDE gold medalist, Baja 1000 overall winner – put everything in perspective with his riding demonstrations and instruction. The only thing more remarkable than Jimmy’s bike control is his humble attitude and down-to-earth delivery…as he effortlessly pilots a giant adventure motorcycle over a pyramid of logs.

If your credit card was already showing dangerous signs of fatigue, there were the friendly but tough Skills Challenge and Slow Race events to participate in, or simply observe. Lots of well-deserved trophies found a home in overstuffed panniers.

Touratech USA’s Adventure Rally West will return to Plain, WA on June 21-24, 2018. Check www.touratechrally.com for ticket and event information. Early bird tickets for 2017 were the bargain of the year at $100! Training courses are extra, and begin prior to the rally dates.

Yeah, you can find all these riding schools online, but it takes a lot of time to comb through the assorted riffraff on the Interwebs.

I thought I’d save you the trouble.