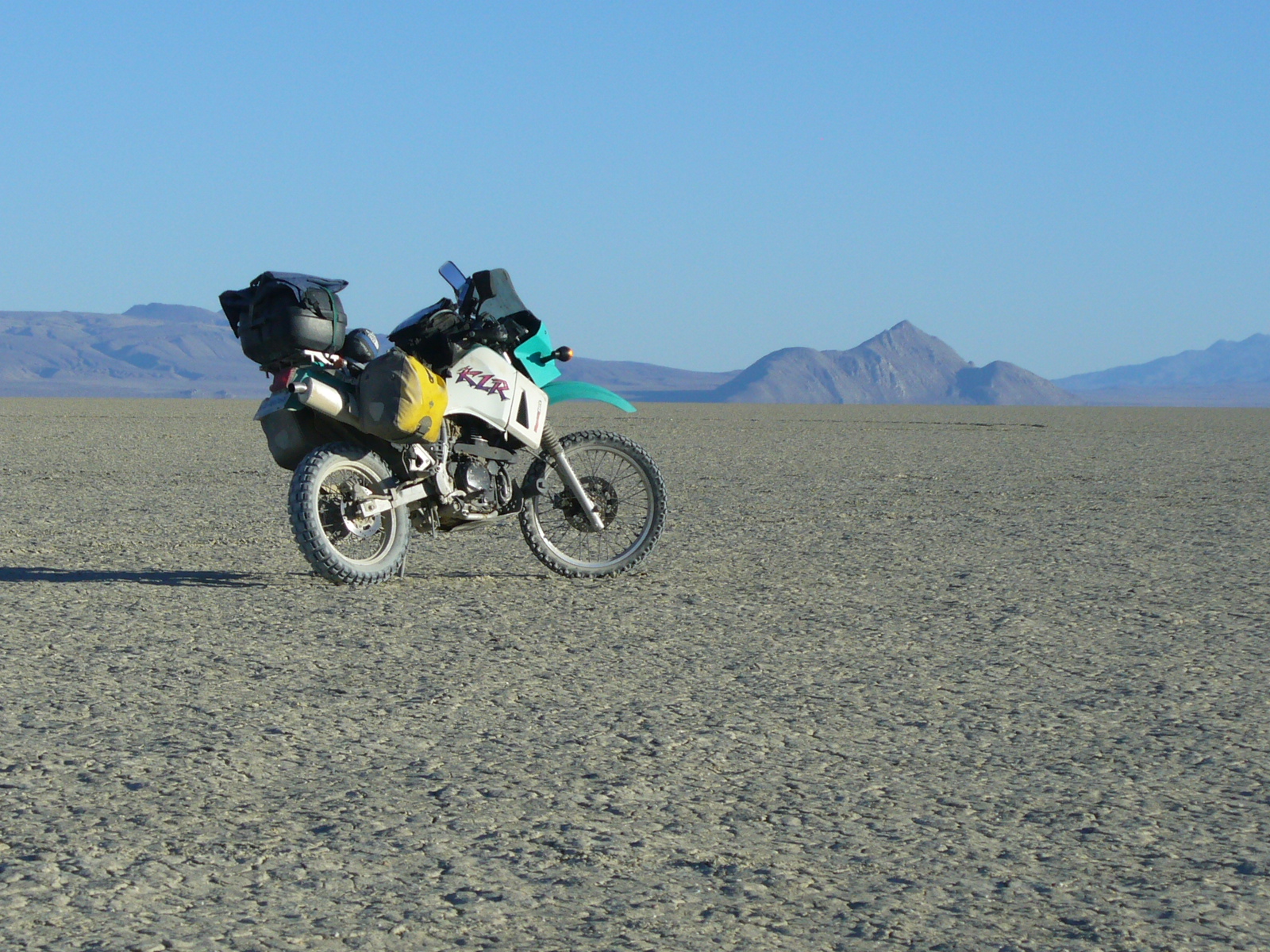 Into the Great Alone

On a July morning, as the rising sun promised relentless heat, I topped up the fuel tank of my Kawasaki KLR 650 in Elko, Nevada. Apprehensively, I filled my water bladders in the gas station restroom: crammed with camping equipment, tools, spare parts and food for three days, my panniers could fit only seven litres of water….

Then I wheeled onto a crumbling ribbon of asphalt winding through arid hills towards the 19th century mining settlement of Mountain City, and rode into the blazing emptiness of a desert dawn.

I was at the midpoint of my annual trek, exploring the deserts of the American Southwest. Loaded with topographic maps, my GPS was the key to navigating multi-day off-road routes plotted between towns. The previous night, with my tent pitched below Secret Peak, near Elko, I had charted a route through the Owyhee Desert to McDermitt, a fading mining town straddling the Nevada-Oregon border. 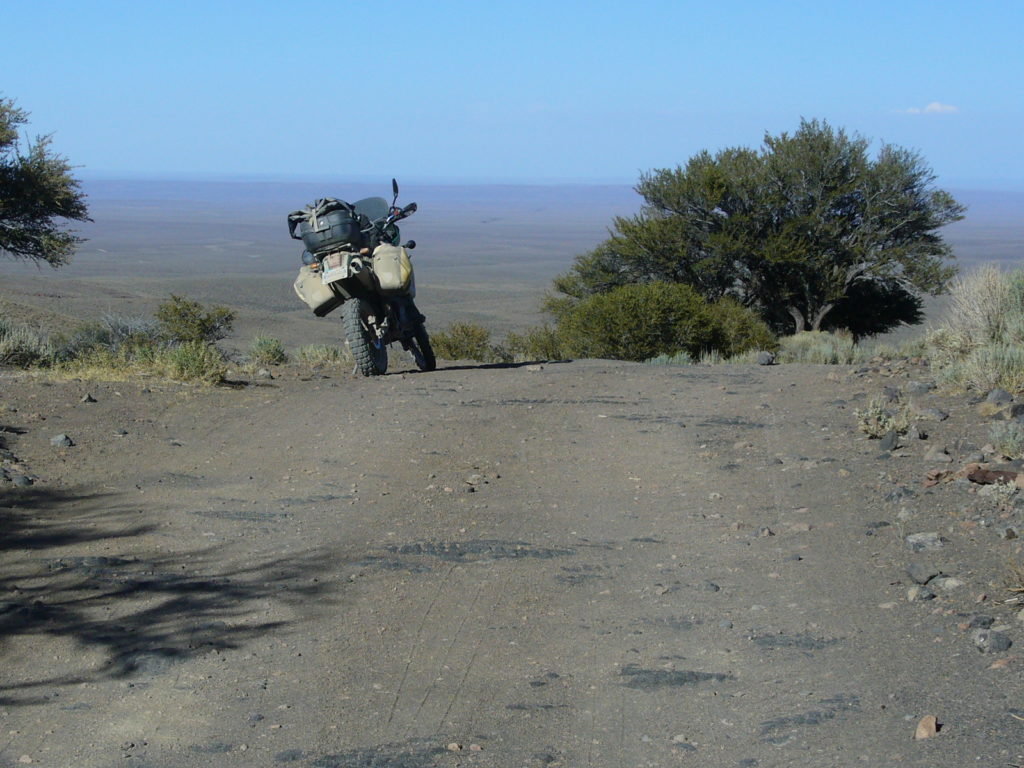 My route would be simple – at first – until I arrived at a dogleg where State Route 226 intersected a feeble stream meandering east from the Owyhee River. Its trickle would be my first objective after quitting the graded gravel of SR 226. From there, my planned route twisted through a braided tracing of lines on my GPS, marking trails and tracks and unused roads. In the Santa Rosa Mountains, the highest elevation of this ride at 2,400 metres, I would briefly parallel the Trans America Trail before searching out Canyon Creek Road and following it to the pavement of Highway 95, south of McDermitt.

Squinting into the heat haze fifty kilometres north of Elko, I turned west onto the 226. The rays of the rising sun settled on my back, and I steeled myself for temperatures threatening to eclipse yesterday’s high of 40 degrees Celsius. The wind blowing through my perforated riding jacket provided some meagre cooling, so I opened the throttle further, more concerned with generating a breeze than risking a speeding ticket in this desolate corner of a sparsely-populated state.

Sweat trickling down the inside of my armour, I muttered to myself, “All the gear, all the time.” Even summer time. Even in the desert….

It was almost 11:00 am. I bypassed State Route 789, which trailed off between low hills towards the declining old town of Tuscarora.

Enjoying the sinuous bends of the gravel road, spellbound in that moment of euphoria familiar to motorcyclists, I was pushing hard when my GPS displayed the waypoint marking a left turn. The KLR’s front wheel ploughed deeply in the loose, dry gravel as I braked to a stop.

Gasping in the sudden heat that clamped down on me, I kicked down the stand and dragged my right leg over the saddle, the top case, tent and Ortlieb panniers making any kind of gracefulness impossible. I folded my mirrors to keep them intact in the inevitable crashes to come, aired the tires down to 13 and 15 psi, and took a sip from my meagre supply of water.

Alone into the shimmering heat of the desert

This was it; this was where I would leave the maintained route and ride, alone, into the shimmering heat of the desert.

Soon I was idling along beside a rare sight in these arid plateaus: vivid green lining the banks of a twisting stream. The water was only a hand-span wide, but it traced a line through strata of mud and sediment marking past accumulations of melting winter snows, heavy sometimes at this altitude of nearly 2,000 metres.

I continued westward, concentrating on the silty paths threading between gnarled bushes of sage, marvelling that these indistinct trails were depicted on the Lowrance GPS. I suspect Nevada’s rich mining history – gold, silver, copper, gypsum – explains the extent and quality of the maps available for the “Silver State.” 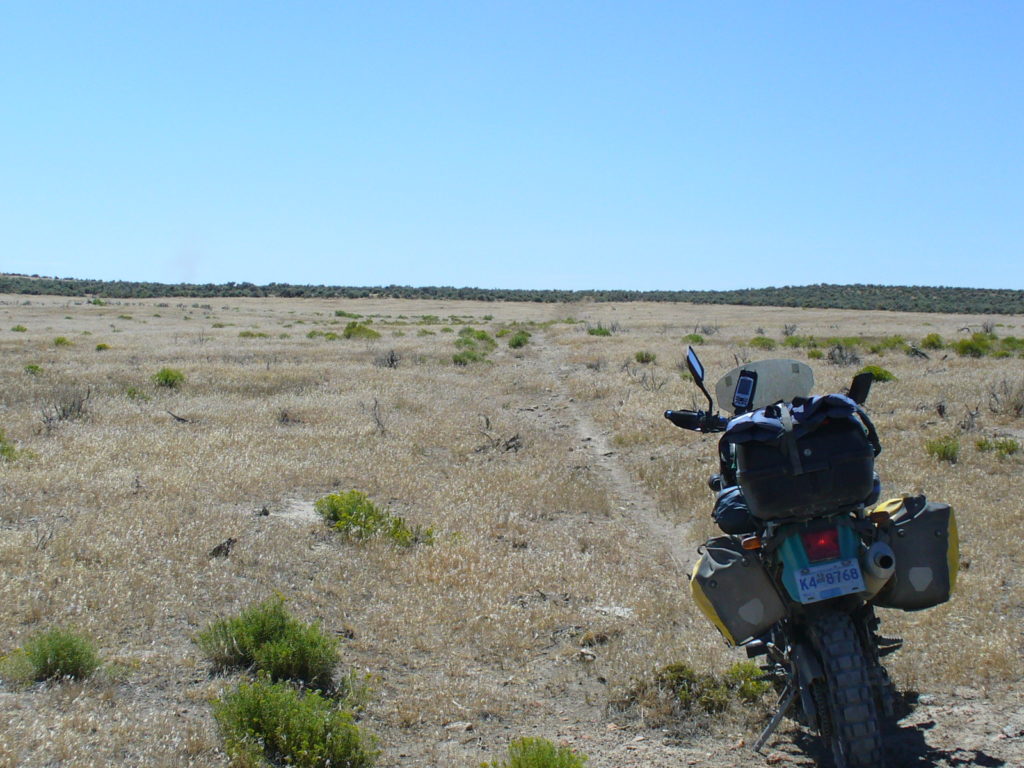 The KLR’s fan hummed steadily; I had wired it to a switch on the dash, concerned that the intense heat of these desert rides would quickly result in disaster if the temperature sensor ever failed to activate the fan.

A sharp right turn led to a wider trail, likely made by the trucks of the cattlemen who sometimes traverse these high plains, rather than the hooves of the cattle that had created the narrow tracks I just departed. The terrain was relatively flat, the leeward sides of low ridges sloping gently into drifts of wind-borne sand and silt.

As I rode, morning drifted into noon, into afternoon, early evening. I don’t really pay attention to time in the desert. I camp when I find a spot that appeals to me, go to bed when I’ve counted all the stars I can, dawdle over breakfast before packing to move on. And then I ride.

I increased the pace, standing on the pegs, the KLR clambering confidently over terrain I had repeatedly been informed was beyond the capability of the overweight, under-suspended Kawasaki. Eyes up, sweeping the track ahead, I spotted something: small dark forms on the trail…. 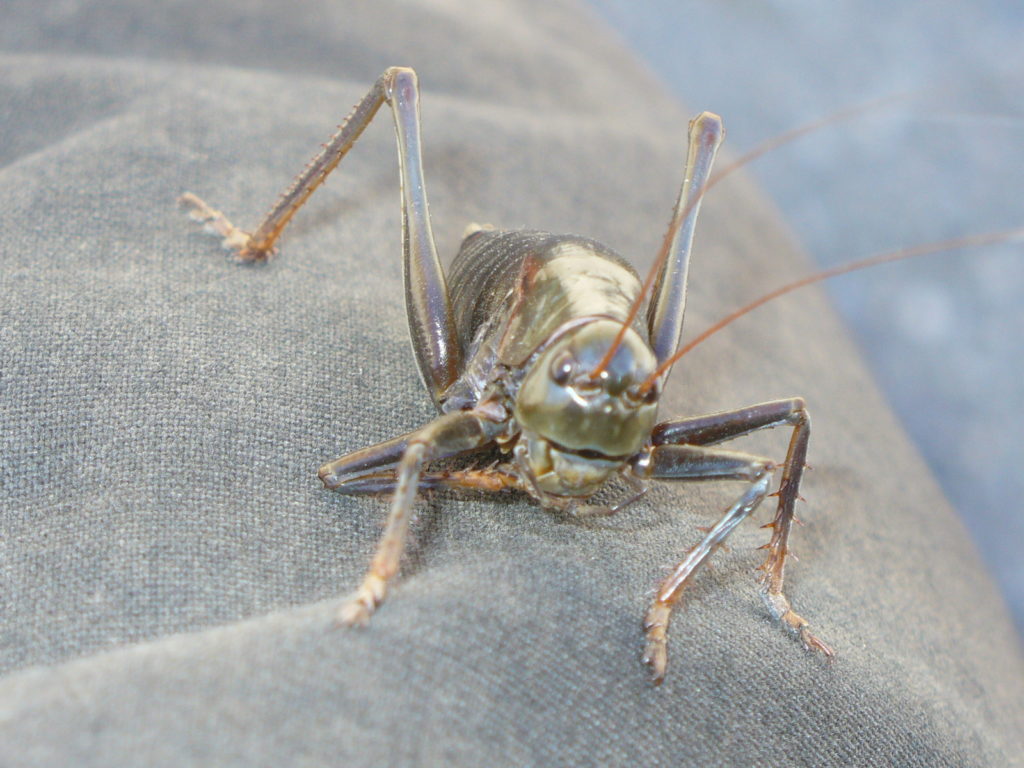 I had never before seen Mormon Crickets, though I had heard improbable stories. Some summers they descend on northern Nevada in swarms numbering in the millions, voracious, flightless red insects measuring five centimetres in length; the size of their swarms can be measured in kilometres. Elko County has been known to use snow plows to clear them from the roads and lays tonnes of poison bait in a desperate bid to reduce their numbers. The residents of the pocket-sized town of Tuscarora have kept the shield-backed katydids – as they are more properly known – at bay with a phalanx of speakers stacked in the streets blasting heavy metal music from dawn to dusk. I kid you not.

As I rolled up and swung clumsily off the bike, these diminutive monsters raced towards me, captivated, I presume, by the possibility that I might be edible. They crawled into the shade cast by the KLR, scuttled up my riding pants. Recalling accounts of the noxious smell they emit if crushed, I flicked them carefully from my legs and decided a swift retreat was in order; it was a very good day to be riding a bike that didn’t require time consuming kick-starting.

The sun was slipping west. I rode a few more kilometres before setting up camp on a grassy ridge where the sandy soil was sculpted into miniature crests and the cricket armies were AWOL.

Space is at a premium when packing for two and three-day off-road crossings between small towns in the desert, and water is always the first priority. That means food isn’t, and my meals reflect that fact: unappetizing pre-packaged pasta invariably forms the entire menu.

But then comes the best part of the day. As the sun sets, the desert relinquishes heat from rock and sand, and the air begins to swirl in a dance of warm breezes. Although equipment for a month-long trip must be ruthlessly cut down, there’s always room for one luxury: the camp chair that lets me lean back and relish the unfolding desert night.

On the second day, my GPS route followed trails that seemed to wilfully fade and re-emerge. I halted frequently to re-assess the map, re-trace my route…re-examine my irrational obsession with solo desert travel. I did have an emergency plan, though: somewhere up ahead, the primitive Lye Creek campsite was said to have a drinking water supply and, possibly, the chance of meeting someone willing to siphon some fuel into the bike. Large as it is, even a KLR’s tank has a limit, and I was worried I would exceed it. I had already travelled almost 300 kilometres. And, to tell the truth, I didn’t actually know where that campsite was located….

I forced my concentration back to the trail as I passed a charred hillside. Lightning strikes occur frequently on this arid plain, and wildfires are the predictable result. Recurring gusts of wind whirled the scorched soil and vegetation into short-lived dust devils that nudged me across the trail, filling my mouth and nose with grit. I continued westward, sipping water each time I stopped to ponder the map or select a branch in the faint, diverging trails.

And I switched the bike to reserve.

As evening approached, I found the Nevada Forestry road that would be my route through the Santa Rosa Mountains. Setting up camp in the lee of a bluff near Hinkey Summit, I found myself lingering, gazing at the sun setting over the distant ridges and plains revealed beyond the height of the range. 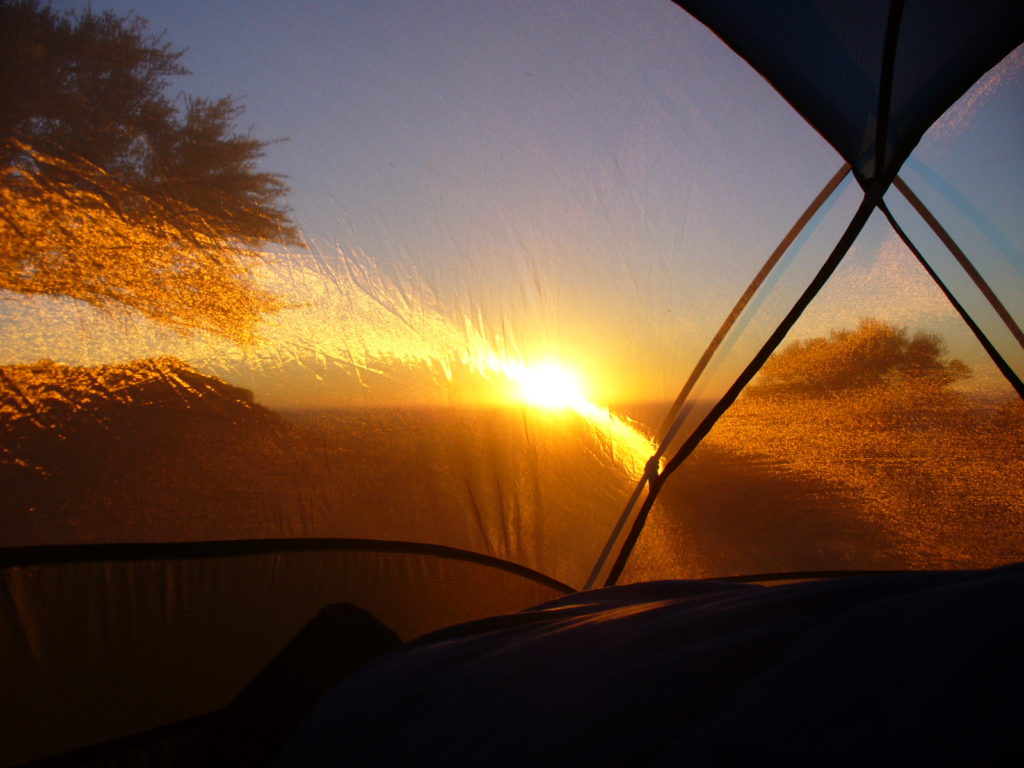 When sunrise woke me, I packed quickly – not my usual lazy morning routine – but I was visualizing a dry gas tank and a long walk during the hottest part of the day. I rode east, accelerating gingerly to conserve fuel, as the forestry road curved back north and then west. Cresting a rise, I saw laid out below me the amphitheatre of Canyon Creek and, with it, my reprieve from hiking in the desert sun: the forestry road descended steeply toward the highway – still hidden below the western horizon – in a series of switchbacks cut deeply into the canyon’s brow.

I cut the engine and coasted down the dusty bends of the road, warily entering corners without the stability normally created by a revving engine and the assistance of compression braking. The profound silence of the desert descended, but the cooling breeze of my forward momentum continued. It was a novel sensation that made the penultimate section of this ride especially memorable.

Reaching the flat bottom of the canyon, I restarted the KLR.

Dismounting, I laid the bike down on its left side, urging fuel from the right section of the tank to trickle toward the petcock – I was so close to the pavement! Upright again, the engine reluctantly coughed into life, and I crept onwards.

I had to resort to the “left-side laydown” one more time before rolling up to the Sinclair gas station in McDermitt, my odometer reading more than 420 kilometres. It was the farthest the KLR had ever travelled on a tank of fuel – and I didn’t need to walk after all…except across the street, to the “Say When” Casino, to celebrate with a cold pint.

2 Replies to “Riding the Owyhee Desert”