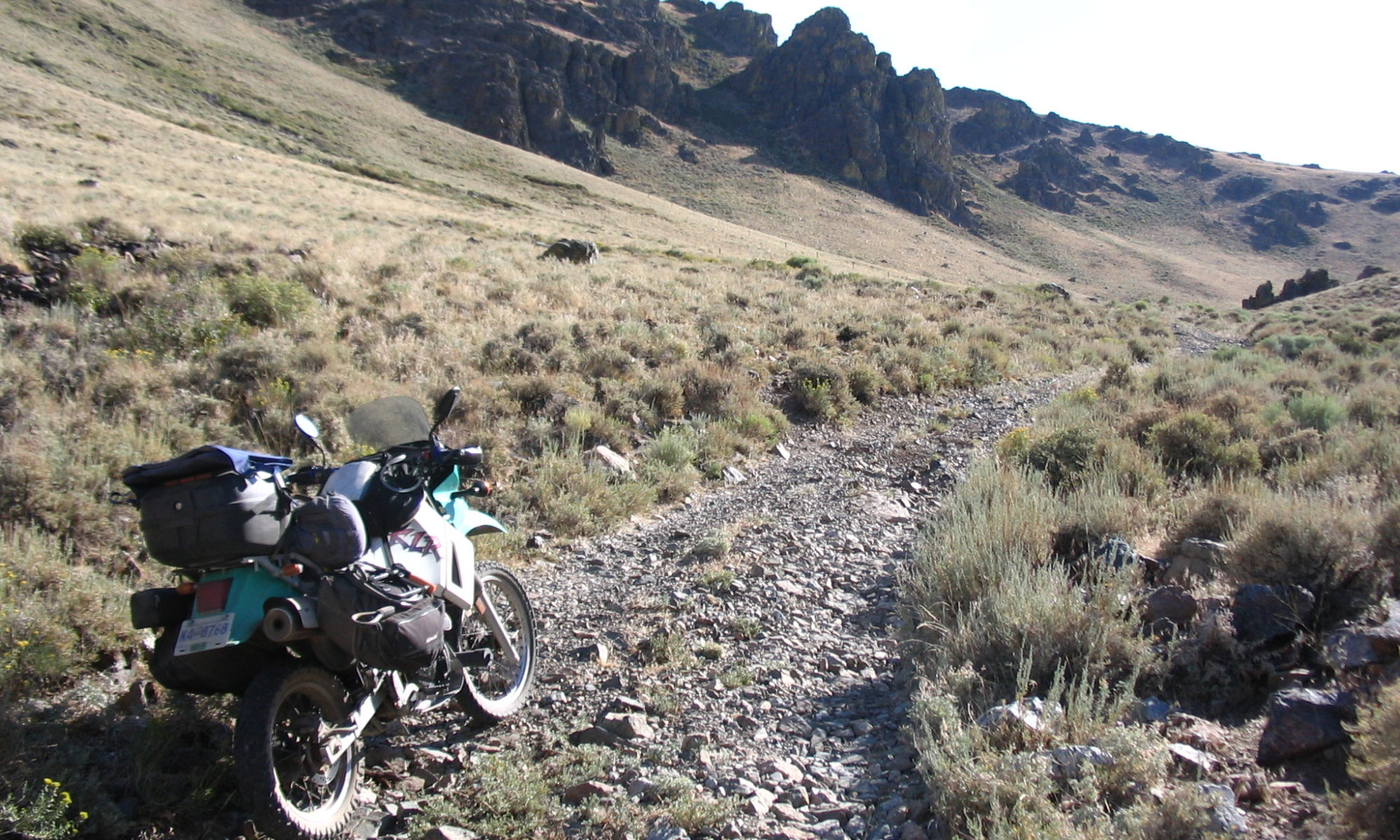 “Keep the rubber side down.”

If you’ve ridden a motorcycle, you’ve heard it: a well-meaning wish for your safety out there on the mean streets among the prowling menace of the “cagers.” (You’ve heard that one, too: cars = cages, and therefore drivers are cagers. Of course.)

Thing is, there was not a street, mean or otherwise, in sight.

I was alone on a rock-strewn track in the Pueblo Mountains of south west Oregon, pondering my heavily-loaded Kawasaki KLR650. And the rubber side was, in fact, currently the most upward elevation on the topography of the bike.

I’d never seen this kind of inversion before, and it was an oddly reflective moment – though the smell of leaking gas and sour foreboding speedily overtook my reverie. I was a long way from the pavement that now seemed inviting, rather than mean, and I was nearly certain that jaunty twist in the handlebars – rhapsodic though it may have rendered a hipster sculpting his moustache – was well outside the design tolerances intended by Kawasaki’s engineers.

At the time, I was pretty new to this adventure riding thing, and I clearly had not consulted those engineers’ plans when I loaded everything I owned on the KLR and pointed it up a rocky trail.

Grunting, I levered the bike upright, rubber side down, and the damage was clear: handlebars bent (awkward, not serious); mirror broken (okay, didn’t like it anyway); clutch lever snapped off at its mounting point (annoying, insignificant).

Insignificant, that is, unless said clutch lever is your spare, installed after the unintended sacrifice of the original lever a few days earlier, victim of a treacherous rock. In such a case, one simply purchases a new spare lever, and all is well.

Or one procrastinates, and all is seriously bungled.

Never fear: unlike the aforementioned cages, motorcycles are equipped with sequential transmissions, meaning the gears are actually quite easy to shift without using the clutch. Unless, naturally, you are attempting to launch from a standstill.

An overloaded KLR mired in a rocky stream bed pretty much defines standstill.

But that is not the point of this story.

This is the point: after a night spent trail side, the ruined lever’s fragments lashed together, beads of JB Weld metal epoxy fusing the seams, I met Deborah, Mike and Donald.

My improvised repair held up as, in the early morning heat of the desert, I retraced my path of yesterday. I reached Oregon Route 205 and turned south, hoping the town of Denio, Nevada, some 30 kilometres away, would possess a repair shop or even a motorcycle dealer.

I can tell you now that Denio, Nevada is a census-designated place – according to the federal government, it doesn’t deserve the appellation of “town” – with a population somewhat less than 50, and a built-up area of precisely 38 houses – although I may have included a few barns, outbuildings, shacks and sheds in the count. And precisely zero repair shops or motorcycle dealers.

In fact, the only sign of life I could see was a triangle of lawn chairs set in the shade of a tree whose branches arched over the roof of a double-wide mobile home. Occupying those chairs, a woman and two men were occupied in adding to the substantial pile of empty Bud Light beer cans amassing at their feet.

I was reluctant to intrude. Or scared. Maybe kind of scared…

Denio lies at the junction of Oregon’s Harney county and Nevada’s Humboldt – the kind of places where guns and opinions are big and dangerous and worn on the hip. Ammon Bundy and his band of anti-government militants staged an armed takeover of a wildlife sanctuary 170 kilometres north of Denio in 2016; the borders of the American Redoubt are drawn nearby, an ad-hoc refuge for libertarian-leaning survivalists who revere the Second Amendment and are looking for a place to fortify when the economy and things in general go all to hell. Both Harney and Humboldt counties registered over 70% support for the Republican candidate in a recent presidential election you may have heard about.

And now you see what this story is really about….

Deborah, Mike and Donald – none of whom were actually named that, by the way – were tracking me with their eyes long before I hit the kill switch in their dusty driveway. I thought I could get the KLR rolling again (even though my temporary repair to the clutch lever had now failed) as long as I stopped somewhere with a loose surface and a clear runway.

I pulled off my helmet and warily began to relate my tale. Deborah looked at me dubiously; there was something she didn’t like about my story — specifically, it turns out, the fact that I was telling it without a beer in my hand and a chair in the shade. With those concerns rectified, she listened as intently as the men sitting to either side of her. Mike and Donald were heading out for a few days of fishing, and had detoured along the way to visit their old friend, Deb, whom they hadn’t seen in about a year.

As I finished explaining my situation, Donald said softly, “Closest bike shop’s in Winnemucca. Hundred miles south.” He registered the anxiety on my face and continued, “Here’s what ya gotta do…”

Don was a UPS driver, and knew every byway and track that would keep me – and my inoperable clutch – off the pavement and away from stop signs and street lights as I approached Winnemucca. He patiently repeated his directions twice as I committed them to memory.

“And if you get lost or broke down along the way, you just knock on anybody’s door.” Mike and Deb nodded while Don went on, saying, “And if’n nobody’s home, you just go right in.”

Now I was the dubious one, and he could see it.

“Out here, you break down, you run out o’ water, you could die. It’s gonna be over a hunderd-and-five this afternoon. Folks know it. Nobody ever locks their door. You just go right in and do what you need to – use the phone, get some water, food. You could leave a note or somethin’, I suppose.”

Deb handed me another beer before sharing her story. “I just got back from Hawaii. Had some friends there I was staying with. I was gone over a year. Left my door unlocked, and I think somebody musta used the place: when I got back, there was more cans in the pantry than when I left.”

We sat for a couple hours, a few beers, talked about America and politics and Canada and bullfrog fishing (yes, you use a regular fishing pole!). We laughed at Deb’s practiced joke that she was, “Living in Denio.” And my fear evolved into surprise and finally admiration – making a quick stop along the way for some shame about my stereotypes. Finally, I think we all settled on just feeling human.

And that’s the point of this story. Don and Mike and Deb are the point: they are the people – the millions of people – in the USA who care for their friends, trust their neighbours, and help strangers in need.

I know you’re still out there; I need you out there…

Because you give me hope.

2 Replies to “Living in Denio”